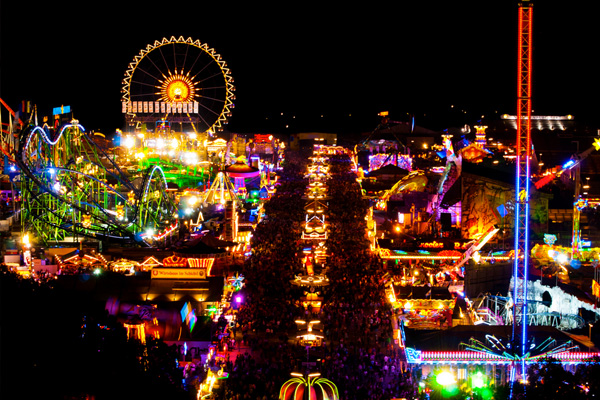 You already know where you’re drinking at Oktoberfest. At least roughly: upon tables; within cavernous beer halls; wedged between various associates you’ll refer to as “fräulein.” But no need to sleep on those tables—we’ve scouted you a few places with even more character. And beds.

Oktoberfest puts your mind through many emotions. Nobody knows this better than Bavarian hoteliers. In particular, the ones who designed this boutique hotel, with rooms themed according to feelings like ecstasy, sadness, pride, fear and drunkenness. That last one has surprisingly tasteful lampshades.

Your glass-blown boot theatrics resulted in a beer hall named in your honor. To celebrate, have at the Royal Suite in this palatial, if unpronounceable, hotel on the parade route. You’ll have a 24-hour butler, leather floors and a balcony for presiding over the processions. Or conducting very dramatic long pours.

CHUCK IT
Rickshawing Your Way from Bier to Bier

There are two types of accommodations: those whisking you where you please in a rickshaw, and those leaving you to your own pedestrian peril. This is the former. Also: they’ll set any female companion(s) up with custom dirndls by the top designers in the haute dirndl scene. Yeah, it’s a thing.

You prefer to take your beer with some beer-related cultural heritage. You’ll get it at this 500-year-old inn, which once housed a 16th-century brewery and actually catered the very first Oktoberfest back when kings still drank from bejeweled chalices. So maybe consider taking yours out of storage.

THE OTHER HOF
The In-House Pretzel Bakery You Need

Somewhere between stein numbers 7 and 74, you’ll get an urge for pretzels. By some miracle of precognition, this place is baking you fresh ones every morning. And when you need hot-chocolate massages in a bamboo-roofed penthouse… they’ve got that covered, too. Germans know you like that.