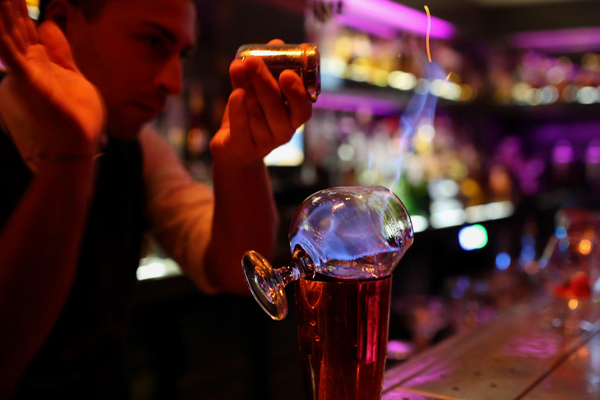 It’s one of the sweetest words in the English language, and a common practice in any establishment worth its salt. But make no mistake about it, friends, the buyback is as serious as the forbidden dance and as delicate as a snowflake; approach it as such.

So without further ado, a few simple rules to keep in mind:

1. Be aware.
Life lesson number one: always keep your head on a swivel. Know what you’re walking into: is the bar packed, are you in a group of over three people, is the bartender covered in 37 pieces of flair? The tics of every bar will tell you whether a buyback is even a possibility.

2. Keep it simple.
A draft beer. A dry martini. As much Jameson as will fit into a highball glass. All of these acceptable, to an extent. But any order involving eight ingredients, four of which are muddled, and lighting something on fire will be viewed as a nuisance.

3. Never ask.
Ever. It’s kind of like asking someone for sex. If you have to, it probably ain’t gonna happen. Nothing will irritate a bartender more than someone feeling entitled to something just for being there.

4. Be gracious.
Congratulations, you made it through all that laborious ordering and consuming of drinks. Now, the payoff: your free round has just been delivered and acknowledged by the barkeep. Keep it together. Nod in appreciation and keep on doing whatever got you here to begin with.

5. Tip accordingly.
The bartender has not only done you a solid here, he’s also done more work than the bill reflects. Add whatever you should have been charged to the bill, and tip off of that—20%, at the very least. Don’t get remembered for the wrong reasons.

6. Decision time.
You’ve hit the Goldilocks zone: feeling good about your state of mind, and the amount of work you’ve put in. You can play into the barkeep’s hands and buy another (the intended Pavlovian response to the buyback). Or casually slip out the front door. The choice is yours, but you just got a free drink, man—you’ve won either way.

Berlin is a city bursting with creative inspiration. With affordable property rental rates, a thriving underground music scene and an abundance of “bright young things”,