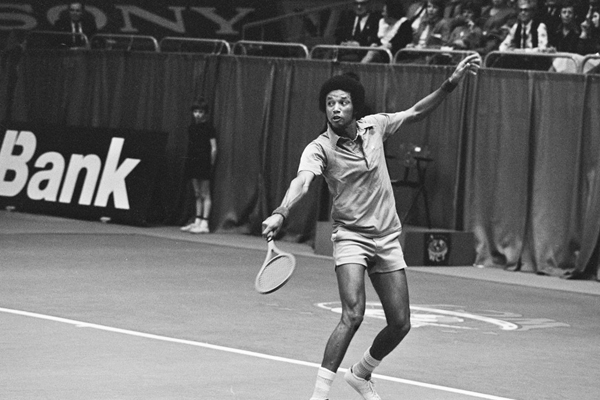 In case you haven’t heard, the first serves of this year’s US Open were launched yesterday at Arthur Ashe Stadium in Flushing Meadows Park, Queens.

Which got us thinking about the venue’s namesake racquet-eer. And boy, does he deserve the consideration. Ashe, the first champion of the US Open in its modern form, lobbed and rallied his way to victory back in the golden days of tennis style—before endorsement deals and corporate sponsorships littered the field with swooshes.  And yet, on courts that had more than their fair share of stark white sweaters and crisp tailored shorts, Ashe was able to stand out sartorially against the crowd.

Maybe it was the glasses.

Take a moment to get to know the newest inductee into this elite pantheon of well-dressed men to admire, and decide for yourself…

Despite taking up tennis as a second-choice sport (his father wouldn’t let him play football due to his being, well, scrawny), Ashe received a scholarship to UCLA in 1963. Presumably it was for the sport, though we wouldn’t second-guess if it were for impeccable sweater choice.

In the next decade, he was able to (in this order, and handsomely, of course) become the first black man to win the US Amateur Championships, the US Open, the Australian Open and Wimbledon.

Of course, however, being the first isn’t always easy. He took it in stride, showing off some classic tweedy dapperness in court while battling the South African government against apartheid so he could play in the South African Open.

But where would any great man be without a partner in crime? So Ashe married his wife, Jeanne, in 1977, and didn’t miss a beat style-wise.

Tragically, Ashe contracted AIDS in 1988 from a blood transfusion. Until his death in 1993 of complications from the disease, though, he donned his best to advocate for a cure.

Because like any Icon, he wouldn’t go down without a fight.

WORDS FOR THE WISE WITH NEON

‘ Good, bad, right or wrong, it’s all relative, art is notoriously ambiguous. The art of challenging conventional semiotics and observing the vast spectrum…