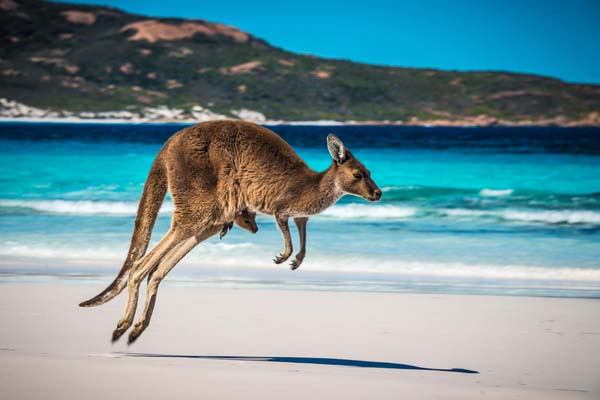 On your well-earned jaunts abroad, nothing is ever done halfway. Going skiing? You’re sleeping in an igloo. Touring Turkish caves? You’ll take a room inside.

And when shark diving’s on the itinerary, there’s nowhere better to crash than right on the beach.

Relaunching early next month is SAL SALIS NINGALOO REEF, a safari camp resting on the sparkling white sands of Australia’s western coast…and just feet from the whale sharks, humpbacks and manta rays of your Shark Week dreams. Surrounded by untouched wild bushlands, Sal Salis’s five wilderness tents are cast far out into the Cape Range National Park. It’s just you, your diving companions and a few stray kangaroos (you know, that old scenario…).

From your tricked-out beach tent, it’s only a running leap to the water where you’ll be swimming with the whale sharks and snorkeling through schools of mantas. Of course, if you don’t want to come close to risking the fate of Steve Irwin, you might opt for less adrenaline-charged but equally only-in-Australia exploits like kayaking with the loggerheads and trekking into wallaby territory. But you’ll want to retreat to your own turf—back at base camp, you’ll crack a bottle of Shiraz and watch the sun fall into the Indian Ocean, then crawl into your 500-threadcount sheets for a much-deserved rest.
Sal Salis Ningaloo Reef
Cape Range National Park
Australia
+ 61 2 9571 6399

The State of Slim Wallet Technology

Your wallet requirements seemed simple enough: something to carry around the essentials (cash, ID, credit, a racy photo of your pen pal) without a…