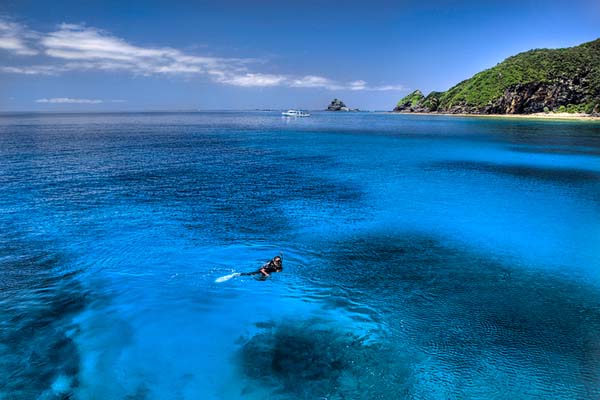 You don’t know what lurks beneath Japan’s oceans.

But you could probably guess.

Then again, there’s no fun in guessing, so…

Don your finest wetsuit for Diving Subtropical Japan, a whirlwind scuba tour in, below and around Japan’s sunniest island coasts, taking reservations now.

By the end of this, you’ll be halfway to becoming a certified amphibian. But let’s start at the beginning: Tokyo. Which doesn’t actually have any scuba diving, but… it has good sushi. And sake. Oh, and an airport, which you’ll immediately use to fly to the southernmost islands of Japan-dom.

Now, things are different down Okinawa way. No skyscrapers—just a few dozen stadium-sized islands at about the same latitude as Hawaii. After your first dive, you’ll post up in a rooftop jacuzzi overlooking some white-sand beaches. If not for the local guides and bizarre television programming, you’ll never know you’re in the Land of the Rising Sony.

But you’re not here for such landlubberly wiles. You came to dive. And dive you shall—17 times in 13 days. Sometimes with manta rays. Others with hammerheads. And at least once around a mysterious underwater pyramid that may or may not be a lost temple of Atlantis. You could easily cross off several of your New Year’s resolutions here.
Diving Subtropical Japan
303-952-0379

A Jungle Out There