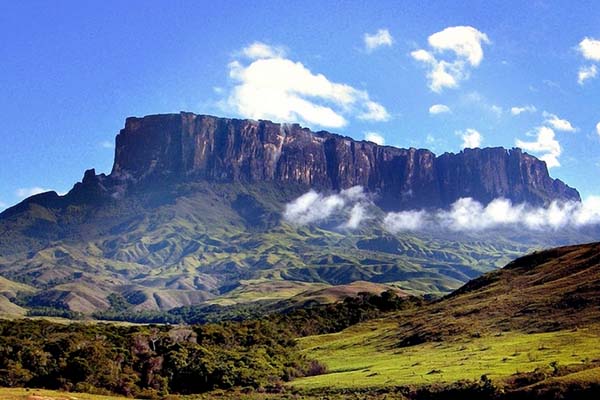 According to a wise old proverb, one should never go chasing waterfalls.

But you’ve never been one to let proverbs (or ’90s R&B songs) dictate where you spend your vacation.

So slap on a safari hat for Roraima and Angel Falls, a 12-day escapade into the depths of Venezuela where you’ll visit the world’s highest waterfall, ascend the country’s highest plateau and set some Instagramming records in the process, taking reservations now for an October departure.

After flying into Caracas, you’ll meet your guide, Sergio. He’ll show you around, teach you to say “A dozen arepas, please” like a local and later whisk you off in a 4×4 across the Gran Sabana—basicallyVenezuela’s version of the American West.

At this point, you should stretch. Because you’re about to trek three straight days over hill and dale and cloud forest to the 9,000-foot-high, 20-square-mile Mount Roraima. At the summit, you’ll set up a campsite. And explore a valley covered in quartz crystals. Also: you can stand in Venezuela, Guyana and Brazil at the same time. Which… yeah, pretty neat.

Oh, right—Angel Falls… 3,200 feet of sheer waterfalling glory. You won’t have to trek there, because you’ll hop a plane. And you won’t be climbing it, because you’ll tour it by boat.

Cannes: yep, still a thing this year. And sure, sunbathing on the French Riviera and sharing popcorn with Spielberg might seem old hat. But…